We would like to thank Bulgaria National Radio for much of the information about the following rituals and customs practiced throughout the Balkans. The paintings were done by Nelinda.

Blagovets, celebrated on March 25, means “good news.” It’s the official feast of the Annunciation, the day Gabriel told Mary she would give birth to the Savior. In folklore, the good news extends beyond the Orthodox Church to the rituals of spring dating back to Thracian times. When you hear the cuckoo sing, it is an indication that winter is departing and summer will soon arrive.

One of the most popular traditions on Blagovets is for women to walk around the yard and bang on metal objects to scare away snakes that are emerging from their dens into the sunlight. Women also sweep out their houses, and everyone piles old, useless items into a pile which they set on fire. Young people jump over the fire to ensure good health throughout the year.

Snakes play another important part in this day. A zanhar, a person who heals with herbs, plants garlic in the head of a snake. The seedling that grow from it is purported to have healing powers.

Legends tell of samovili and dragons who return from their winter abode on this day. When the cuckoo sings, it warns mothers not to let their daughters near places of water in the morning because that is where the samovili gather. These female nymphs of the woodlands and waterways like to play tricks on people and even carry them away and make prisoners of them.

Sultana watched him from her rocking chair. “That me medicine cabinet. No doctors close. Me use the Nature to heal ills. Me kill snake on holy day, Blagovets. Snake and evil spirits play then. Loud noise drive snake to sun. Easy to catch. Garlic growing in head cure all ills.” She covered her lap with the afghan. “It not snake-guard. He live under house and protect house and hearth. Never hurt snake-guard or have bad luck.”

Nestinarstvo (Bulgarian: нестинарство) is a ritual where people, predominantly women, dance on embers with their bare feet as a means to purify themselves with the fire’s healing powers. The Thracian word “nestia” means “fire.” Like so many Bulgarian customs, fire dancing incorporates both Orthodox and pagan beliefs.

Martenitsa (Bulgarian: мартеница) is an amulet or bracelet made of red and white yarn that symbolizes the coming of spring. Bulgarians begin to wear them on March 1 (Baba Marta or Granny Marta) and continue to wear them until March 9 or March 25, or until they see a stork, sparrow, cuckoo, or blossoming tree. At that point, people remove the bracelet and tie it to a tree to ensure good health and luck throughout the year.

Read the full blog post here: A Thread of Hope

If you’re in Bulgaria on New Year’s or on Sirni Zagovezni, the first Sunday before Lent, you will be in for a fascinating parade and series of skits as the kukeri make their appearance. These are men who dress in furry costumes that cover most of their bodies, and they wear colorful wooden masks with scary faces of rams, goats, or bulls. The hand-carved masks display snapping jaws, twisted horns, and frightening eyes. Some masks even portray two faces—one evil and one good—to symbolize the duality of nature.
Read the full blog post here: Kukeri – Masked Men
And you can read an additional post here: Kukeri.

Eniovden (Еньовден Enio’s Day, or Midsummer’s Day), celebrated on June 24, coincides with the Eastern Orthodox Feast of St. John the Baptist, celebrating his birth. Born six months prior to Jesus, John proclaimed a message of repentance as he paved the way for the Savior.

And read an additional post here: Seventy-seven and a half herbs for healing 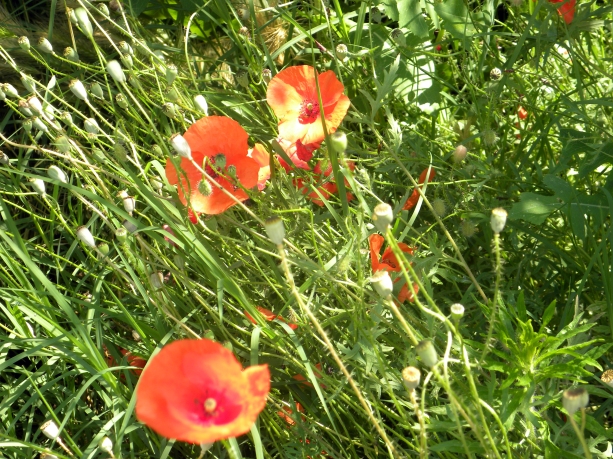 A well-known Bulgarian livelihood is beekeeping. It’s no wonder the country has a day, actually two, honoring beekeepers. On July 8, Prokopi Pchelar (pro-copy pchee-lar) or Procopius the Beekeeper, beekeepers perform rituals to entice bees to produce an abundance of honey. They also give away jars of honey and bread coated with the sticky substance as a way to protect family and friends since they believe honey has magical and curative powers.

Subscribe to our monthly newsletter to get free recipes, fun activities for the entire family, news about our new books, and much more. We will never share your email with anyone.