Spassovden is a time, in Bulgaria, when Rusalki return from their winter home in Zmeykovo (Dragon Village). They spread life-giving dew on the fields. This dew has an added benefit besides fertility for crops: it can heal diseases, especially the dreaded Rusalka disease, which the spirits themselves bring on people who disobey rules against working.

The night before Spassovden is a time for “impossible wishes” to come true with the help of Rusalki and their favorite flower, rosen (Dictamnus albus or burning bush), which means “dew.” It grows in various places across Bulgaria and blossoms for only a short time in June. According to folklore, it blooms only on the night before Spassovden, when the flower is at its most powerful state for curing people.

The spirits are known to pick the white, pink, or red blossoms this night to make wreaths for their hair. On the Sunday morning after Spassovden, Rusalki use these wreaths to sprinkle the fields with dew. Intoxicated by the fragrance of the flowers, Rusalki become merciful to people.

During this week Rusalli perform their mystical dance to heal people and chase away evil spirits. Diseases Rusalki cause are not to be trifled with. To rid a person of this type of illness requires various means to scare away the spirits and drive out the illness: incantations and loud noises, such as rattling cans, ringing bells, whistling, and singing. The best solution, though, is to pay the Rusalii to heal you, and you’ll get all those methods at once.

Who or what are the Rusalii?

The word refers to a group of men who travel from village to village, healing those inflicted with Rusalka disease and possessed of unclean forces. The name is associated with the rituals or festivities celebrated as well. The rituals have mostly died out today, but are still performed for show. 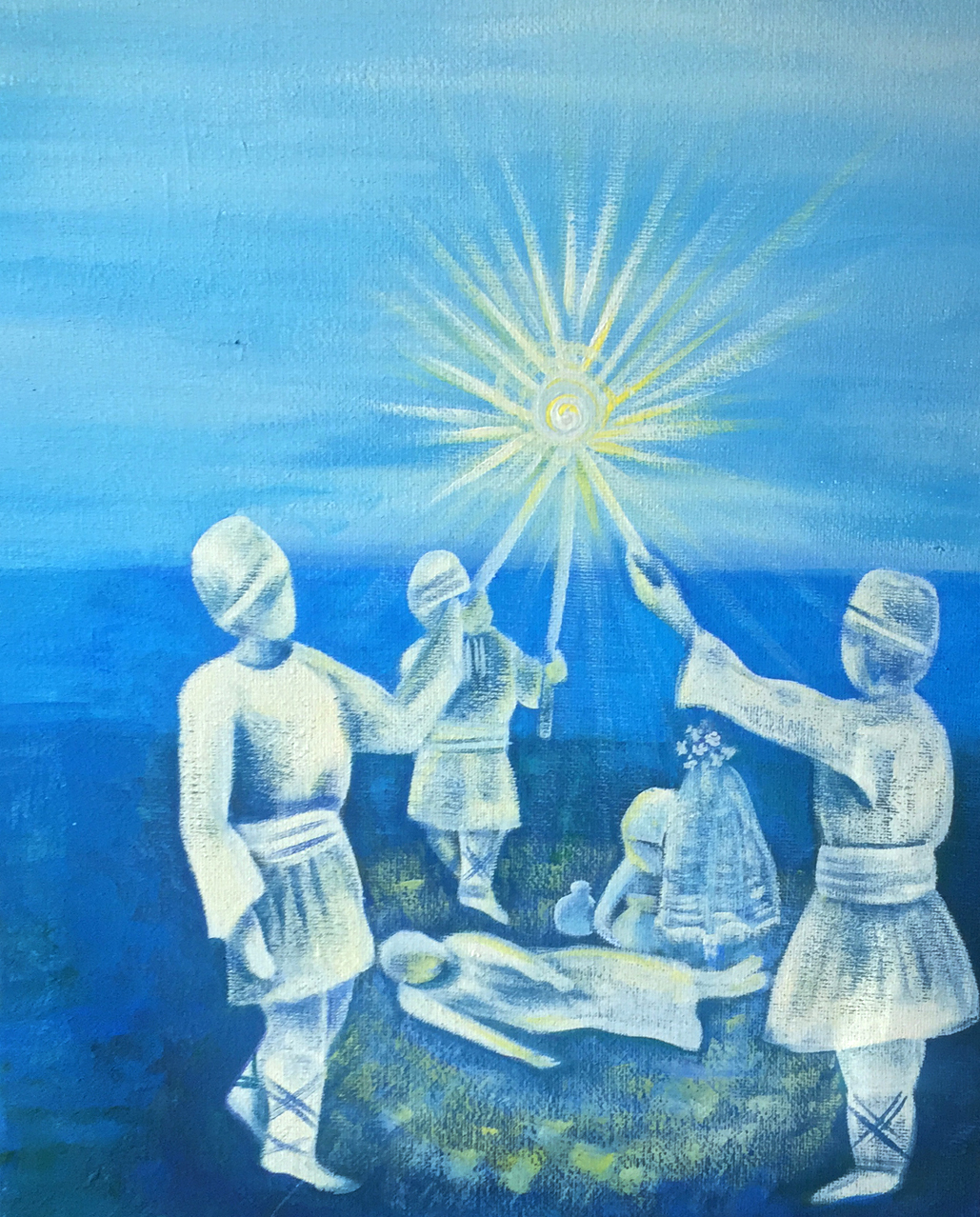 These rusalia or rusalii celebrations, as they were called, have been recorded as far back as the late Middle Ages. In the twelfth century, legal scholar Theodoros Balsamon wrote about popular fairs called “rousalia” that occurred after Easter. And in the thirteenth century, a Bulgarian archbishop mentioned the name in a homily.

Rusalii festivals take place three times a year: around the spring equinox (Rusalka Week), the summer solstice (Midsummer’s Day or St. John’s Day), which is celebrated in northern Bulgaria, and the winter solstice (the “Dirty Days,” the twelve days from Christmas to Epiphany), which is celebrated in southern Bulgaria. During the cold months, the men drive away karakondjuli (night spirits), talasumi (evil spirits), and zmeyove (dragons). In the warmer months, it’s Rusalki and Samodivi (woodland nymphs) they focus on. The spring rusalii, which has “a military flavor,” is performed to cure the sick and drive away disease; the ceremonies also are dedicated to fertility and Rusalki, who bring that fertility. The spring rusalii is when Rusalki begin “to dance their way out of the wild into the world of farmer and shepherd.”

In a ritual called “visiting the rosen” or “walking on the dewy rosen grass,” sick people go to a field where this plant grows, or their relatives bring them there if they’re too ill to venture out on their own. Most often, however, people go there in secret, not allowing anyone to see them arrive.

They choose a location that’s close to a holy spring where a church or chapel has also been built. Magic wells with water that cures all diseases are often found in locations where Rusalki live. It’s possible that the springs found near rosen fields in these sacred places are ones that connect with these magic wells. One famous place you can go to is the village of Resen, which gets its name from the flower. Or perhaps you’d rather go to Krustova Gora, Holy Trinity Cross Forest, in the Rhodope Mountains. You can also travel to the Bulgarian Lourdes, a plain near the foot of the Stara-Planina mountains, where rosen grows in abundance.

Ill people, clothed in white, wash with the sacred water, then prepare for the night ahead. They spread a white sheet on the ground to sleep on. Near where their head will lie, they place a bowl of water, a twig from a rosen bush, a lit candle or oil lamp, and a white handkerchief on which they place gifts for the spirits: a cup of honey and rolls spread with honey, shirts, towels, stockings. Before they go to sleep, the people eat a meal they’ve brought: bread, cake, roasted chicken, wine, rakia (Bulgarian brandy).

They must keep a strict silence during the night. At midnight, Rusalki arrive, bearing their queen on a chariot of human bones. They cause a whirlwind to blow over the sleeping humans, carrying with it the soft, whispered words, laughter, or songs of the spirit maidens.

As the Rusalki gather flowers, they strew leaves, twigs, sand, insects, and petals over the sleeping people. Tales have been told of people feigning sleep, those who have lost a limb, hearing Rusalki say, “Restore (person’s name) leg (or hand or fingers).” All who hear the spirits speak their name are destined to be cured.

In the morning before sunrise, people who could sleep through the turmoil awake and check their surroundings. The sight before them displays the fact that the spirit maidens have been present during the night. One person in the village of Lyaskovets said that when he took his father to the rosen field for treatment, in the evening the flowers of the dew were whole, and the next morning most of the flowers were broken, as if cut with scissors.

Everyone examines the water and handkerchiefs to determine their fate. If nothing has fallen onto the cloth or into the water, it means Rusalki have chosen not to heal the person. Others are fortunate if green leaves and live insects have dropped onto the items they set out. This means they will recover. If the leaves and insects are dead, or the water and handkerchief are covered with twigs, the people will remain ill and possibly even die from their malady. Dirt left on a handkerchief is a certain sign the person will die from his disease.

The above is an excerpt from our book about Rusalki. You can get a copy at all major retailers if you’d like to learn more about these lovely maidens and beliefs about them: A Study of Rusalki – Slavic Mermaids of Eastern Europe.