Traditions & Beliefs: Treasures of the past – beacons of the future.

“A wealth of knowledge of Bulgaria’s ancient customs and how they are celebrated today.”

Where to Purchase: Amazon Universal | Other Retailers 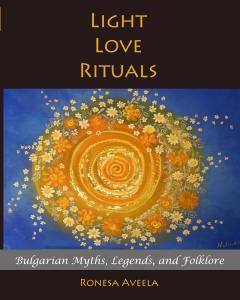 A book for children and adults from 8 to 108 who would like to take a journey and discover Bulgarian folk tales, legends, and mythology. Whether you want to learn a little about their ancient Thracian origins, or you want to experience rituals practiced throughout the year with a fictitious Bulgarian family, or even if you’re only interested in traditional Bulgarian cuisine, this book has something for everyone.

Bulgarian culture is rich in folklore and traditions surviving since the days of the ancient Thracians. As pagan and Christian religions collided, many celebrations merged into one. “Light Love Rituals” will take you on a journey to discover these unique festivals.

“Light Love Rituals,” not only describes the rituals, but also makes them interesting and understandable to people of all ages. The book is divided into four seasons, beginning with winter. It includes activities where you can learn how to make martenitsi, survachka, and Easter eggs dyed with natural colors. A short quiz after each season lets you test your knowledge of what you’ve read. To help you engage in the traditions in the book, you’ll meet Maria and her family. They’ll open the doors of their home so you can participate in these celebrations along with them. For an added taste of Bulgaria, try some of the traditional recipes at the end.

If you’re interested only in the recipes, they are offered in a separate book: Mediterranean & Bulgarian Cuisine: 12 Easy Traditional Favorites.

Bulgarian’s take pride in their heritage and culture, which is rich in folklore and traditions. Some people say the nation practices thousands of rituals. In the process of writing Mystical Emona: Soul’s Journey, I learned about many of these customs. I found myself asking “Why?” on numerous occasions. Why did the people do the things they did? Those “whys” resulted in further research. What were the origins of these customs and rituals? What did they mean?

What I discovered was an overlap of pagan and Christian beliefs. Many customs date back to the days when the Thracians inhabited the area which is now modern-day Bulgaria, Greece, and Turkey. So much of the material I read said the traditions had Thracian origins, but few articles delved into what those Thracian beliefs actually were. So the research continued.

I discovered the rituals focused on the seasons and life cycles, both of nature and mankind. Then as today, rituals emphasized fertility, birth, marriage, death, and immortality through rebirth. Honoring the dead was as important in ancient times as it is today, since the spirits of the departed protected the living from evil forces. And so, many of these rituals are performed specifically for that reason—to protect the family from malevolent spirits and creatures who wander between the realms of heaven, earth, and the underworld. But the rituals are not only about protection. Health and fortune are common themes.

Light Love Rituals is the result of this research. It introduces you to modern customs and rituals kept alive by generations since the time Thrace was a thriving nation, even though the ancient people themselves may have long been forgotten. It’s a summation of many months spent researching. Although I did search for reliable sources to validate the claims made in many articles, this book is not meant to be a scholarly document. Nor is it an exhaustive study of rituals. It’s information I found interesting that I wanted to share so other people can take the same journey to discover another culture.

Many of these rituals are part of the story of Mystical Emona: Soul’s Journey. Although much of the content is common knowledge among those who practice these beliefs, I hope even they will discover something new, something they can pass on to future generations to keep the customs alive.

To make it fun like the customs themselves, I’ve included activities and recipes to more completely give you a taste of Bulgarian culture.

“Within the pages of this book you can slip back and imagine the ancient people, their crafts and ways of doing things for their gods, spirits, and entities that no longer exist.”

“Light Love Rituals is a feast of culture, stories, and glimpses into the past.”

“Myths, legends, Bulgarian history and traditions are clearly explained, along with wonderful scenes between a fictional Bulgarian family.”

“The details in this book made me feel as if I was in this ancient and marvellous country.”

“Each subject of her book (a particular ritual, a recipe, a craft, or a historical fact) is interwoven with a competent confidence that can only come with an author who knows what she is writing about.”

“It was simple to follow, easy to understand, and delightfully engaging.”

“This book is a great reference for anyone looking to understand more about Bulgarian myths and legends, but it’s also presented in a way that would be appealing to anyone who has an interest in learning more about the spectacular and intriguing world of folklore.”

“The illustrations are beautiful and help the reader to visualize the rituals and traditions being explained.”

“I really enjoyed all the ‘Did You Know’ facts, often one of my favorite parts of a book.”

“The stories, myths and culture all came to life.”

“Even though much of the traditions discussed are in reference to the holiday, we learn more as we witness a fictional family’s experience of the holidays, complete with a wise grandmother who tells stories and explains traditions to the children.”

“This book provides a wealth of facts about the mixture of Orthodox and pagan traditions in simple country living.”

“A labour of love this is a detailed account of Bulgarian customs and its cultural and ethnic backgrounds.”

“A book can do to things, it can teach and it can entertain. This book shines in both aspects.”

“I thought the explanation of the traditions told through the eyes of a Bulgarian family was a great way to illustrate the material and inclusions like quizzes and recipes make this a really fun, interactive book for all ages.”

“The word that continually springs to mind while reading this enchanting, sun-orientated, life affirming, book is beauty, an impression renewed on every page.”

“Opening the book was like entering a riotous colorful bazaar of information, all about Bulgarian folklore and myths, going back to the times of the Thracians.”

Subscribe to our monthly newsletter to get free recipes, fun activities for the entire family, news about our new books, and much more. We will never share your email with anyone.