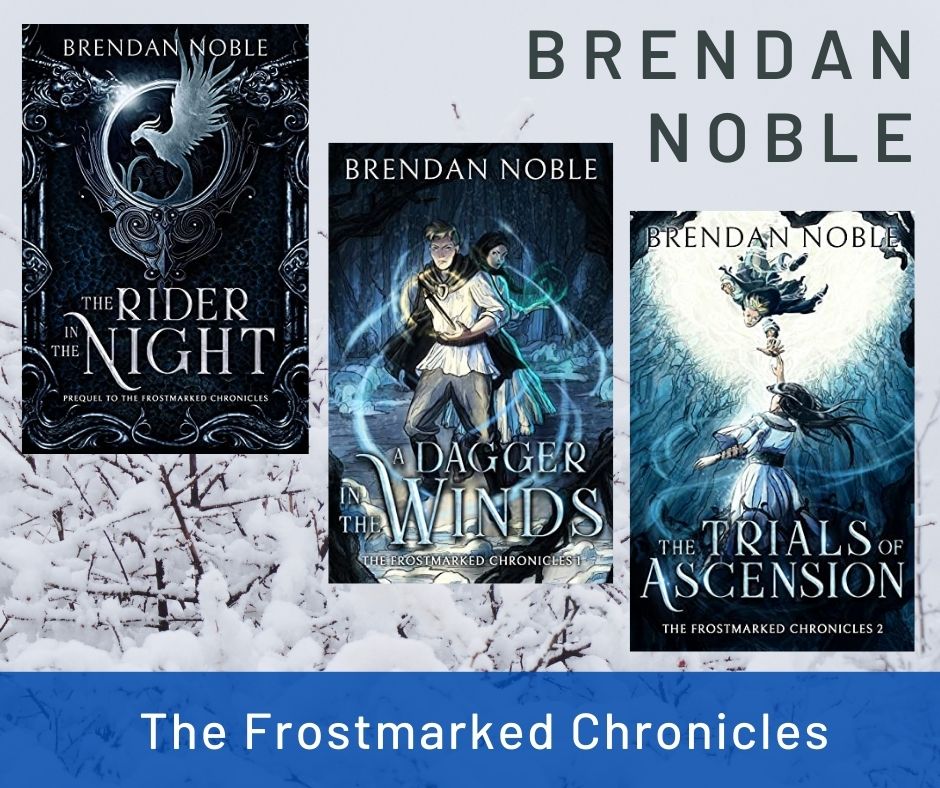 Brendan Noble is a Polish and German-American author currently writing fantasy inspired by Slavic mythology: The Frostmarked Chronicles. Through these books and his “Slavic Saturday” post series on YouTube and his website, he hopes to bring the often-forgotten stories of eastern Europe into new light.

Shortly after beginning his writing career in 2019 with the publication of his debut novel, The Fractured Prism (Book 1 of The Prism Files), Brendan married his wife Andrea and moved to Rockford, Illinois from his hometown in Michigan. Since then, he has published six full-length novels, including four in The Prism Files and two in The Frostmarked Chronicles, along with a novella for the latter series.

Brendan founded Eight-One-Five Publishing in 2021, wishing to inspire and help authors in the Rockford area write, publish, and distribute their works, regardless of socio-economic status.

Outside of writing, Brendan is a data analyst, soccer referee, and the vice-president of Rockford FC (Rockford’s semi-pro soccer club). His top interests include German, Polish, and American soccer/football, Formula 1, analyzing political elections across the world, playing extremely nerdy strategy video games, exploring with his wife, and reading.

Title: A Dagger in the Winds and The Trials of Ascension (The Frostmarked Chronicles books 1 and 2)

Tell us a little about The Frostmarked Chronicles.

The Frostmarked Chronicles tell the tale of an outcast named Wacław and a witch named Otylia, two once-best friends who were torn apart against their wills as children. Combining Slavic mythology and epic fantasy, it explores what a fantasy realm would look like if Slavic gods, demons, and spirits roamed the world.

Quick description of A Dagger in the Winds:

An outcast cursed since birth. A witch chosen by a goddess. Torn apart by fate, together, can they save their tribe from eternal winter?

Rejected by his father and forced away from his best friend, Wacław is a dreamer who has never actually dreamed. Each night, his soul leaves his body, allowing him to wander invisibly until he wakes. He’d do anything to understand why—even give a blood offering to the goddess of winter and death.

But when a dark force soon rises within him, his only hope for answers is the one girl he’s forbidden to see: the witch Otylia.

Favored by the goddess of spring, there’s no one Otylia hates more than the winter goddess—except her once best friend Wacław. It’s been four years since she saved Wacław’s life using forbidden magic. Her thanks? Abandonment. She’s needed only the spring goddess since.

But when her goddess goes silent on the first day of spring and she discovers Wacław bearing the winter goddess’s mark, Otylia realizes the horrific truth: Winter will not end, and her lost friend is the key to uncovering why.

Embark on an epic journey through a world rooted in Slavic mythology and folklore that has powerful gods, menacing beasts, cursed forests, forbidden romance, and plenty of secrets to uncover.

What is your passion about this country? Why did you choose it for you setting?

Growing up as half Polish, I never realized some of our family traditions came from our Polish heritage. When my grandparents on my mother’s Polish side of the family died in recent years, though, I took an interest in my heritage. I dove into learning about Polish soccer/football and tried to learn more about its language and history, since so little of it is taught in the United States. That led me to Polish mythology (and Slavic mythology as a whole).

As someone who’d loved Greek myths in school, these new gods and demons were fascinating to me. I couldn’t believe how hard it was to find about them in English, so I decided to compile as much on them as I could through my Slavic Series posts on my website and YouTube, sharing the cool stories with others. I’d also enjoyed the bits of the Witcher that had Slavic mythological inspiration. Nothing I saw, though, was like the Percy Jackson books I’d read as a kid. It was all loosely pulling from tales or implementing a few demons here or there. So, I decided to write my own epic fantasy with the gods and myths wrapped into a new world.

Is this the country you were born in? If not, have you ever lived there?

I am from the United States and have unfortunately not had the chance to visit Poland or Europe at all yet. Though, it is definitely on the top of the places I would like to visit once the pandemic has passed.

What will readers discover about this country when they read your book?

Despite The Frostmarked Chronicles being high fantasy, Wacław and Otylia’s Krowikie tribe is rooted in the Vistula Veneti and the successor tribes of the Dark Ages. Their tribal government, customs (like the Drowning of Marzanna), warfare, and conflicts with surrounding groups are inspired by real events, just in a new world. Throughout the series, readers will meet Slavic gods, encounter horrific demons and spirits, visit mythical realms, and delve into some of the themes of Slavic myths.

What other books have you written?

My previous series is called The Prism Files. Based in the modern Twin Cities of Minnesota, the series examines an alternate history where the United States never became a republic. In the dystopian present, people are sorted into color-coded classes by the corrupt Prism Test, and through the four book series, a Red slave named Ivan must infiltrate the elites of the society to end the Prism. This one has no Slavic mythology, though the remnant American monarchy is inspired by the Russian one.

What People Are Saying about The Frostmarked Chronicles …

“This is one hell of a journey, one hell of an epic adventure and once I picked this up I was so engrossed in the story the day just slipped on by! It’s so well written and the world building is so incredible that you can actually visualise yourself there as we follow our amazing characters on their journey.” – Goodreads review of A Dagger in the Winds

“I was so excited for this book and it did not disappoint. A Dagger in the Winds artfully weaves Slavic mythology into a story of feuding families, disgraced young people, and the hope of finding yourself. Both main and supporting characters are incredible and give hope that there is redemption for even the demons among them.” – Goodreads review of A Dagger in the Winds

“The world I found myself in, was so beautifully crafted, so many different aspects come to life, the underworld is unlike any I’ve read before, magnificent.” – Goodreads review of The Trials of Ascension