The kukeri celebration is one of the oldest surviving traditions that can be traced back to Dionysian rites, symbolizing life, death, and rebirth. Men initiated rituals when spirits threatened the Sun’s rebirth. The kukeri continued the practices into the spring, before the sowing of the harvest, when the earth was awakening after a long winter. Thracian warriors believed if they dressed in animal skins, they could battle against these spirits and either scare them away or capture their powers. With them, the kukeri performed rituals to renew nature’s strength. Only men, who carried the seed of life in their bodies, had the ability to rouse and nurture the female Mother Earth. 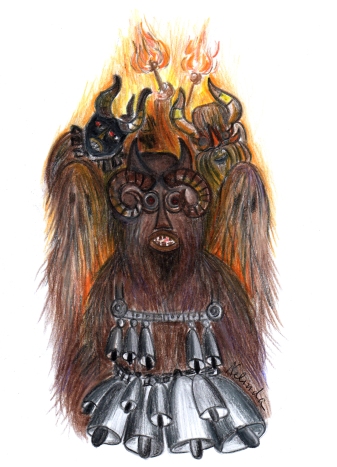 An unmarried ruler named Dobrodor, the maker of good, spurned the love of Zliyana, the daughter of a king of the northern lands. Because a kind, beautiful woman had captured his heart, he returned tokens of love Zliyana had sent to him.

Living up to her name, Zliyana sought to bring evil on Dobrodor and his people. She cast a spell to make all unmarried men die if they tilled the fields. Since it was springtime, some disregarded the warning and ploughed the earth, consequently dying.

To prevent any more deaths, Dobrodor told all the unmarried men to disguise themselves. Some donned women’s clothing, while others wore masks from the skins of animals and tied bells around their waists. The men dressed as women harnessed the ones clothed as animals and drove the ploughs through the fields. The witch’s magic was fooled, seeing not men, but only women and animals in the field.

Kukeri have scared away more than spirits. Turkish soldiers surrounded a rebel leader his followers. To terrify the soldiers, they put on masks, bells around their waists, and made torches of hemp soaked in tar. At dusk they crept out to where the soldiers camped. The soldiers scattered upon seeing devils carrying long forks and breathing fire.